Cannot thank you enough for supporting Redefining Oblivion
Posted by Rakesh Vanamali at 1:00 AM 25 comments:

Shine On You Crazy Diamond

Of a nine-part Pink Floyd composition written by Roger Waters, Richard Wright and David Gilmour, this is a tribute to former band member Syd Barrett. He was their lead guitarist and wrote most of their early hits, but was eased out of the band in 1968, due to erratic behavior patterns. Substance abuse played a big role in his mental illness.

Word has it that Barrett, with a completely shaved head and eyebrows, wandered into the studio while the band was recording Wish You Were Here, although Nick Mason has since stated that he is not entirely certain whether "Shine On You Crazy Diamond" was the particular song being recorded when Barrett was in the studio. Because of his drastically changed appearance, the band could not recognize him for some time. When they eventually recognized Barrett, Roger Waters was so distressed he was reduced to tears.

Someone asked to play the song again and Barrett said a second playback wasn't needed when they'd just heard it. Apparently, when "Wish You Were Here" was played, "He stood up and said, 'Right, when do I put my guitar on?'" Wright recalled. "And of course, he didn't have a guitar with him. And we said, 'Sorry, Syd, the guitar's all done.'" When asked what he thought of Wish You Were Here, Barrett said it sounded a "bit old".

The track was first performed on their 1974 French tour, and recorded for their 1975 concept album Wish You Were Here. To me, this track defines Pink Floyd and its signature progressive psychedelic style. It, undoubtedly, is the best produced pieces of music, that nothing could rival, ever!

With inputs from Wikipedia
Posted by Rakesh Vanamali at 1:00 AM 20 comments: 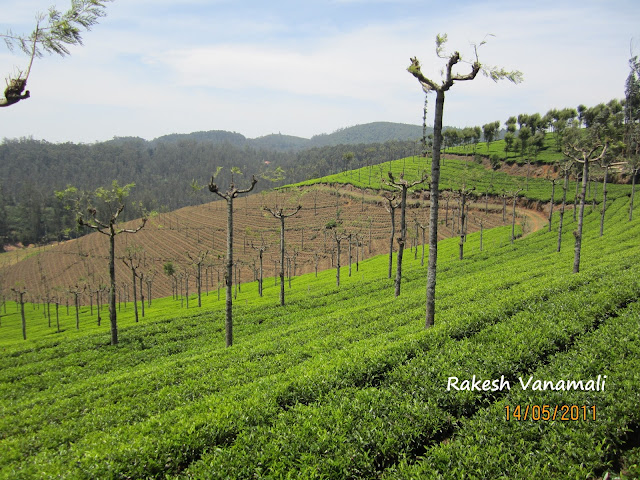 Image Description: Tea gardens in Lovedale, outside Ooty
Posted by Rakesh Vanamali at 8:37 AM 24 comments:

In the company of stars, lights in trance,
moments of splendid indulgence,
wind, mountains, streams and the trees,
all part of an assemblage of happy regales,

Without words or expressions to distort,
those visuals that make for delightful import,
vast meadows of sun-spilled warmth,
set about in green prairies of endless charm,

The everlasting allure of an old world,
against the braggadocio of those newfound ones,
we have always known of the winner before, here,
which those plenty retards know not to care,

Time, to some, is a tool of wise immoderation,
spent well on what is worthy of accommodation,
yet, for some others there is no path or way,
caught drifting in a callously downstream sway.

Inspired by the second single 'Us and them' from the English progressive rock band, Pink Floyd's eighth studio album 'Dark Side of Moon' released in 1973.
Posted by Rakesh Vanamali at 1:00 AM 22 comments:

-- For my part I know nothing with any certainty, but the sight of the stars makes me dream ~Bill Waterson, Calvin & Hobbes 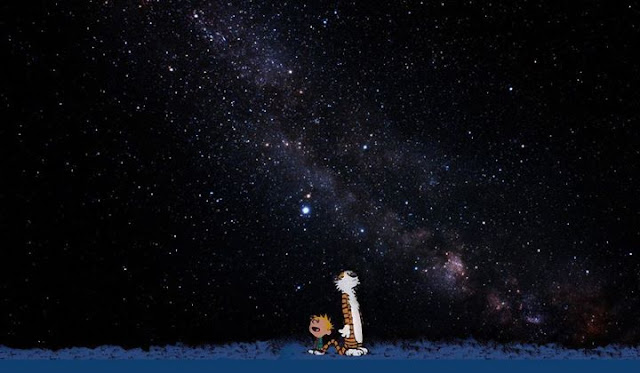 Paying tributes to American artist and the author of the comic strip Calvin and Hobbes, William "Bill" Boyd Watterson II who was born on July 5, 1958.

Image Courtesy - Google
Posted by Rakesh Vanamali at 1:00 AM 16 comments: