On German television, DW, the other day, I was watching a short feature on how elders of a tribal community in Australia strongly deliberate and weigh the impact of their decisions on as far as seven generations into the future.

Strangely, I'm wondering how none of us, this side of the planet, pay attention to how much our actions could impact our immediate posterity, let alone a few down the line.

Therefore, I wonder if we depict too much of arrogance really - quite unlike, in utter ignorance, like how we think we'd be capable of destroying the world! Silly plums in fools paradise, I say because a fool with a tool is still a fool!
Posted by Rakesh Vanamali at 1:00 AM No comments:

No, not the Jack Bauer, CTU and save the country types - I mean the title!

Really, what do you do when you find yourself at the limitation of time, hideously at that, when surely 24 hours is way too short for all that keeps happening?

For all the organized bit that I think myself to be, or did until now, there is surely a great deal of test happening, even as I write this out. I guess life has a way of putting one's beliefs to the test purely to be able to stretch things to the maximum aimed at making one much more malleable than what is perceived or, worse still, emphatically believed!

I wonder where it was I read a while ago that the thing about time is not managing it, but managing ourselves within it.

Posted by Rakesh Vanamali at 1:00 AM No comments:

Nik Gowing of the BBC would not be too happy that I chose to title the first part of this post after his popular feature on London, but I couldn't do otherwise, considering this very interesting snippet I chanced upon while sampling some good continental cuisine over the weekend.

This seems to be a very interesting detail of the history of Chennai and how it came to be! The image is compressed and will require a double click plus some degree of magnification to read through, after which one finds a great deal of interesting things about the city in a chronological format. It was worth the read to me and I thought it would make a wonderful Monday morning post, especially after a bit of running around places to get the original paper which was much larger than the standard A4 scanned, and finally ending up cutting it slipshod considering that it wouldn't fit into any flatbed scanner otherwise. Worth the effort, I thought!

Have a good week ahead folks!

Posted by Rakesh Vanamali at 1:00 AM No comments:

Anything that results as the coming together of Ian Gillan, Jon Lord, Roger Glover, Ian Paice, Don Airey, Ritchie Blackmore and of course Steve Morse can only be known to life as Deep Purple and that for me stands among the most respected music lineups in history. Whilst the glory of such a magnificent creation cannot be articulated within the limitation of this post, I thought, nevertheless, to showcase one of my most admired tracks of Deep Purple here.

Anya, from the 1993 album The Battle Rages On, is a wonderful characterization of the self in the successful quest for purpose, I believe, supplemented strongly by the desire to embark on a journey in the fullest belief that every endeavour is a milestone that needs to be realized, almost always in singularity, propelled by a deeply driven passion originating undoubtedly from the level of the soul, though originally it intends, among other things, to convey traits of a Russian girl by the name Anya!

Ultimate in its rendition of the marvelous guitar, combined by momentary staccato type beats pulsating a feverish state of ecstatic euphoria, I will forever remember this one to be a ballad to be carried a very long way into life! Timeless legend, I'd say!

Incidentally, fellow-blogger and mother of Kareltje and Betsie, among others, is also Anya, who I know is as deeply thrilled listening to Deep Purple, as I am. :-)
Posted by Rakesh Vanamali at 1:00 AM No comments:

By some measure, though small, and particularly debatable in the context of the present day, given a large measure of visible lopsidedness, today in history has been witness to perhaps the very first attempts to further a culture of democratic coexistence aimed at achieving a sense of peace and mutual respect in the geo-political scenario that was.

This day, in the year 1946, the United Nations Security Council held its very first session.

Presently, though the situation is far from desired, with many raging battles ongoing, there is a sense of hope that collectively, we, as mature human beings, empowered by reason and discretion, will come to understand the importance of diversity and unity in the same sense that we respect and value ourselves, at least for the sake of our posterity that absolutely needs a supreme sense of security to live in ways that we have always envisioned and endeavoured for our own selves.

Short bursts of spontaneity perhaps, but lengthened implications, well into timelessness? Well, time will tell, and most certainly, only hope will fuel.
Posted by Rakesh Vanamali at 1:00 AM No comments: 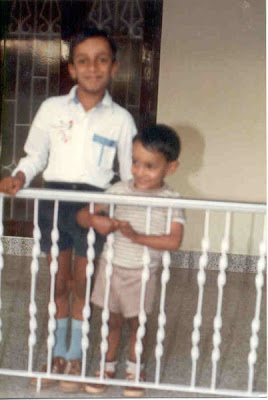 I've watched you grow. I've grown up with you. Now I will want to watch you grow up, bigger and better than me.

Not quite, I know. But that's not stopping me make a post on one of the most admired music numbers, for the message of ease, peace and quiet it conveys, all of that in the face of intense adversity. What best than to post it on a Monday morning, I thought! Besides, its been a while since I did a full-fledged music post, but somehow the messages seem to tag well.

"Easy" is a 1977 hit single by Commodores for the Motown label, from their fifth studio album, Commodores.

Written by Commodores lead singer Lionel Richie, the song, a slow ballad with country and western roots, expresses a man's feelings as he ends a relationship. Rather than being depressed about the break-up, he states that he is instead "easy like Sunday morning."

Released in March 1977, "Easy" reached #1 on the Billboard R&B chart, and #4 on the Billboard Hot 100. The success of "Easy" paved the way for similar Richie-composed hit ballads such as "Three Times a Lady", and "Still", and also for Richie's later solo hits.

Faith No More recorded a cover of "Easy" originally as a b-side during the studio sessions for Angel Dust, following its repeated performance during live shows, but was released as the final single to the album in late 1992 - early 1993. It was their highest-charting UK hit, reaching #3, their second Number One single on the Australian charts and their final charting single in the American chart Billboard Hot 100, peaking at #58. It was originally issued on December 29, 1992, on the double A-side single with "Be Aggressive", listed as "I'm Easy", in Europe and over three months later in America on the Songs to Make Love To EP, it was later included on the European version of their album Angel Dust. Other appearances include a 2006 commercial for Levi's Jeans and as the theme tune for the TV program Goals On Sunday.

With inputs from Wikipedia.
Posted by Rakesh Vanamali at 1:00 AM No comments:

It seems that somethings that have been bad for a while now are just getting worse!

Couldn't help wincing aloud reading "Food inflation for the week ended December 25 jumped four percentage points to 18.32% on the back of rising onion, tomato, egg, fish, meat and milk prices. This is its highest level in more than a year. And the rising food bill could well be the thin end of the wedge. Food prices have a 14.33% wei-ght in the overall inflation figure. So, when the inflation rate is released on January 15, it is bound to be significantly higher than the 7.48% level last month."

Am quietly wondering if this combined with my 15 hour days are more than enough reasons to ask for a raise!

And as far as action from the Finance Minister is considered, one would be better off waiting for mythical beings to arrive from the very distant world of Zukon, or hey, is this the handiwork of the Trade Federation of Naboo?

Nevertheless, do have a good weekend and stay safe - more importantly, stay happy!
Posted by Rakesh Vanamali at 7:45 AM No comments:

Labels: Business and Us, Calling India, Chennai, Life itself

I wish you the Love of friends and family...and Peace within your heart....

I wish you Health... So you may enjoy each day in comfort!

I wish you the Beauty of Nature. I wish you Wisdom to choose priorities!

I wish you Generosity so you may share... all good things that come to you!

I wish you Happiness and Joy... And Blessings for the New Year!

I wish you the best of everything... that you so well deserve!

When you are lonely, I wish you Love!

When you are down, I wish you Joy!

When you are troubled, I wish you Peace!

When things seem empty, I wish you Hope!

Wishing you a very happy and prosperous year ahead, one that will bring you peace, happiness, success and cheer in unending measure!

Opening Statements - 2010
Posted by Rakesh Vanamali at 1:00 AM No comments: