For sometime now, Boston Globe has been publishing some very interesting pictures gathered from all over the world on a wide-variety of happenstances that are mostly current.

I've been an ardent fan of 'The Big Picture' so much that it is one of only 4 bookmarks permanently residing on my browser book-marker, and that I find time to relish it almost every day.

Undoubtedly, among the most celebrated photo-blogs, it is quite a treat to visit this space for what it offers - a cross-section of the world at large.
Posted by Rakesh Vanamali at 1:00 AM No comments:

The Green Lungs of Chennai 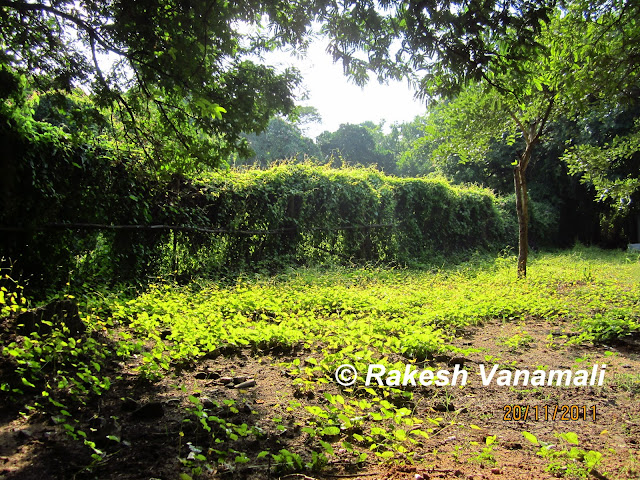 There probably isn't another place within a bustling metropolis in India which is some three square kilometers and a national park! Guindy National Park in Chennai is a rare occurrence indeed, one which is a shining example of human-nature co-existence at its peaceful best.

I suspect wildlife of the future will be concentrated only within tiny pockets, such as these, which will beg to survive alongside human habitation. Given the enormous pressure commercialization and modernization seem to be exerting on natural biodiversity, it does not take an intelligent guess to estimate the future of these wonderful expanses of exquisitely rare beauty.

Having visited the adjoining areas of the park over the past weekend, I was compelled to draw a small parallel to the outskirts of Ooty.

Once covering an area of 5 sq kms (1.93 sq mi) of one of the last remnants of tropical dry evergreen forest of the Coromandel Coast, Guindy Park was originally a game reserve. It was owned by a British citizen named Gilbert Rodericks from whom it was purchased by the government in 1821 for a sum of  Rs. 35,000. It was established as a Reserve Forest in 1910 - Sourced from Wikipedia.

Picture taken by me during the stroll.
Posted by Rakesh Vanamali at 1:00 AM No comments:

India's biggest vegetable baskets lie across the expanses of Tamil Nadu. Motoring through its heartland this past weekend, we discovered a land of exquisite sights and sounds, and these marvels even in the smallest measure satiate the senses no end.

Traversing a small part of this great wonder, lush with paddy fields, neem trees and coconut palms wet with padded fertile soil, one is treated to sublime ways of life happily disconnected from the maddening rush.

Simplicity and contentment greet us every step of the 339 odd miles we drive through. There is a heightened sense of peace and blissful coexistence with nature which unfailingly offers bounties to all those who call upon her.

As day gives way to dusk, the sound of temple bells thronging faintly in the distance is heard amidst the carousal cries of birds on tree tops settling in for the roost. Warm aromas of spices fill the air indicative of many a hearth working their way.

Truth is, life's greatest gifts are evidently for the picking, elementary and free! And to experience them in abundant measure - blessed to be blissful!
Posted by Rakesh Vanamali at 1:00 AM No comments:

Some of the best treats in life are elementary in nature and I just about figured that watching a movie in an 'open-air ambiance' could well fit into that list!

This is precisely what we did sometime last week! Driving into a serene location studded with trees at the periphery, we relished a not so popular but impressive flick under the night sky!

I wonder how many of us could really take the time out for some difference that life has to offer!

Thankfully, I did and I enjoyed! ;-)
Posted by Rakesh Vanamali at 1:00 AM No comments:

Quite a rare occurrence indeed, this 11-11-11 11:11, but certainly intriguing to read the kind of 11th century discussions that this date has triggered online!
Posted by Rakesh Vanamali at 11:11 AM No comments:

On this day in 1971, Led Zeppelin released Led Zeppelin IV which till date is America's third-best selling album ever. It included Stairway to Heaven, 'the widely-considered best rock song ever recorded.'

Jimmy Page, the founder of the band, in recognition of the legacy the song created, said "the wonderful thing about "Stairway" is the fact that just about everybody has got their own individual interpretation to it, and actually what it meant to them at their point of life. And that's what's so great about it. Over the passage of years people come to me with all manner of stories about what it meant to them at certain points of their lives. About how it's got them through some really tragic circumstances ... Because it's an extremely positive song, it's such a positive energy, and, you know, people have got married to [the song]."

Stairway to Heaven is an iconic tribute to music in the true sense. It is a timeless epic and the result of creative excellence that remains unmatched and probably will continue to be so for all time to come.
Posted by Rakesh Vanamali at 10:25 AM No comments:

Need I say anything at all about the monsoons and the effect on places such as Chennai?

With ominously dark, gloomy skies heralding the oncoming of barrages of lashing rain, it is going to be quite depressing and massively inconvenient for normal life.

I'm quite tempted to say; 'Wake me up when December ends!'